Automotive companies are actively using additive manufacturing and 3D scanning. Local Motors is one of the first companies that used 3D printing, and it has been operating for fifteen years and has managed to produce several models of cars and unmanned buses with 3D printed bodies.

Several now-former employees, including Vice President of Sales Christopher Stone, head of IT Jeffrey Hollowell, and superintendent Noel Citron, reported a complete cessation of operations. They are all silent on the reason for the shutdown, so for now we can only guess. There are two main versions: loss-making, caused or exacerbated by transportation restrictions in view of the ongoing pandemic or a damaged reputation after the recent Ontario incident. A combination of factors may well have been the cause.

What happened in Ontario? A rather absurd situation that almost turned into a tragedy: Last December, one of Olli smart buses crashed into a tree. Fortunately, the high-speed characteristics of these electric buses are not impressive, being the software is limited to thirty kilometers per hour, and on the Canadian route supposedly developing no more than 20 km / h. Nevertheless, one person onboard received serious, though not fatal injuries. 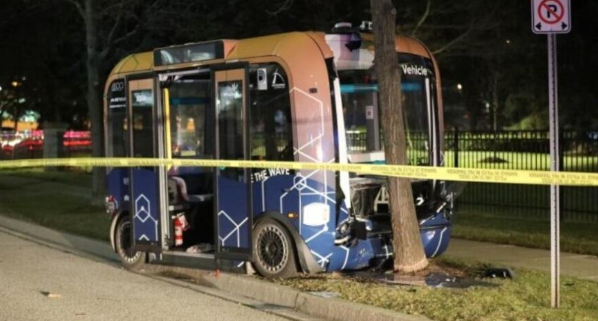 As is usually the case, the public readily put the blame on artificial intelligence and immediately used this example as proof of the failure of the concept of unmanned vehicles. The tone was changed a couple of weeks later when local police reported the results heir investigation. It turned out that at the time of the accident, the bus was being manually operated by a young operator who was driving the shuttle to the depot. The driver failed to control the vehicle, flew out onto the side of the road and the bus hit a tree. There was no other person on board, besides the injured operator who was soon discharged from the hospital. Despite the official conclusion, removing the blame from the designers, the operation of the cars was suspended for an indefinite time.

Whether the incident played a significant role in the fate of the company is not clear but exactly one month later Local Motors completely stopped operating. The company website is still up, so it may be a temporary suspension rather than a complete liquidation, but judging by the abundance of personnel looking for new jobs, even a temporary suspension would be of little comfort to the former team.

Local Motors will be remembered for other interesting cars as well, beginning with the Rally Fighter. The guys from the American version of Top Gear rolled this monster in due time (see video below), and all its essence was summed up by the presenter: “This truck is a real tank!”

But Local Motors gained real fame a little later by taking on the 3D printing of car bodies and other components. They adapted a huge BAAM (Big Area Additive Manufacturing) 3D printer developed with the help of Oak Ridge National Laboratory (ORNL) and manufactured by Cincinnati Incorporated.

These auger extruder systems print with polymer pellets, usually carbon-filled ABS. Once the 3D printing process is complete, the parts have to be sanded. Such a solution is compact and at the same time allows the bodies to be reshaped on the fly.

(It is interesting to note that many manufacturers of large-format 3D printers are switching to using such extruders, for example, Delta WASP 3MT also has this technology available.)

With BAAM, the company planned to flood the market with customizable LM3D Swim 3D printing machines costing about $50,000 apiece but clearly overestimated demand. Then the company switched to drones and launched the first version of Olli, an electric shuttle driven by IBM Watson’s Internet of Things (IoT) for Automotive artificial intelligence. The shuttle accommodated up to twelve passengers, and the electronics not only controlled traffic but also communicated with passengers, answering questions about objects along the way, such as restaurants or local attractions.

In 2019, Olli was updated to version 2.0 already with fourteen seats and mileage up to 160 km on a full charge. The proportion of 3D printed components in these buses is as high as 80%. Things were looking pretty rosy: one municipality after another was launching electric cars in pilot operation, Olli eventually made its way to Germany and Saudi Arabia, and Goodyear decided to test the practicality of airless tires on these buses. Local Motors opened two production facilities in the United States, then a third in Berlin, and even made plans to roll out a whole network of microfactories around the world for localized production, using additive technologies, of course.

If the company had any long-term problems, the management did not talk about them publicly, so the news about the closure of Local Motors came as a complete surprise. We can only hope that the pioneers in the field of 3D automotive printing will still manage to save their enterprise.

There are currently 6456 companies inside the directory